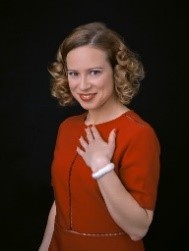 Rita Hatzmann-Luksch was born in Vienna. Raised in Salzburg and studied acting at Bruckner University in Linz. Performances include „Helena“ directed by Luc Bondy, Burgtheater Wien, „Die Nervensäge“ directed by Leo Bauer, „Wozzeck“ directed by Peter Stein, Salzburger Festspiele, „The Rocky Horror Picture Show“ Musikfestival Steyr, „Die Nächte der Schwestern Bronte“ Landestheater Linz, and has performed in many leading roles as an ensemble member of Stadttheater Dortmund. She has had engagements with Stadttheater Klagenfurt, Arbos Salzburg, Kaendace theater Graz, Ensemble21 Vienna and other companies, and has played many different roles for television and movies.